Save the last dance! Nkhatha/Baxter fairytale comes to an end 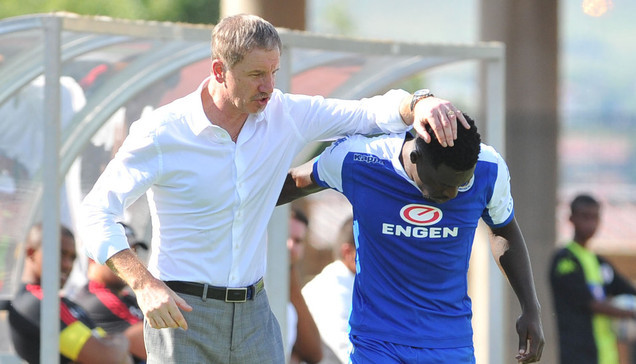 Zimbabwean striker Kingston Nkhatha is set to end his illustrous jorney with Briton coach Stuart Baxter this weekend as the coach will take charge of Superaport United for the very last time this weekend.

Baxter is set to take his final stand wearing his SuperSport hat, before permanently donning his Bafana Bafana hat, when they take on Orlando Pirates in the eagerly-anticipated, traditional end-of-season clash on Saturday in the Nedbank final.

Though not so may agree, but in Baxter’s own words, Nkhatha is ‘world class’.

Nkhatha has always proven to be Baxter’s right hand man, with the two been together at three different clubs (Amazulu, Kaizer Chiefs and now Supersport). Baxter has always relied on Nkhatha for goals and he delivers.

Baxter stood buy Nkhatha during his days at Chiefs when the player was subjected to booing by local fans.

The two were rejoined at now Supersport in a shock move midway the 2015/16 season. The Zimbabwean forward, agreed to a shock move to Supersport United in January 2015, after having featured in all but one of Amakhosi’s league matches in the first half of the season and scored just twice.

Now it appears the journey may be coming to end with Baxter coaching a side Nkhatha can not join even in the wildest of his dreams – Bafana Bafana. Perhaps given a chance, just maybe, Kingston Nkhatha will be playing for the SA national team also.

As the curtain winds down for Baxter at the helm of Supersport, Nkhatha will know it will be a honor to bid farewell to the coach who stood by him when nobody else did, by landing him silverware. The British tactician is hoping to leave on a good note by placing something in the club’s trophy cabinet.

Save the last dance! Nkhatha/Baxter fairytale comes to an end