In the Castle Lager Premiership this afternoon FC Platinum returned to winnings ways when they beat Tsholotsho 1-0 at Mandava Stadium.

FC Platinum came into the match after three consecutive draws. However, Gift Mbweti put his side into the driving seat with only four minutes on the clock as he opened the scoring with a well-taken individual effort

Tsholotsho improved their performance in the second half and had the ball in the back of the net in the 57th minute after a goalmouth scramble following a free kick only for the goal to be ruled out for offside by the assistant referee.

Tsholotsho continued to match FC Platinum as the half progressed forcing the home side to defend.FC Platinum held on to collect maximum points and move into fourth on the log table. Tsholostho remains rooted on the bottom with 10 losses in 15 games.

At Luveve Stadium Chicken Inn’s winning streak came to an end with a 0-0 draw against Ngezi Platinum.

There were very few chances for either side especially in the first half but the game became more lively in the second half. Ngezi Platinum’s Tichaona Mabvura came closest to opening the scoring but his effort was flagged for a clear offside.

The result was enough to take Ngezi Platinum back to the top of the table for at least 24 hours. 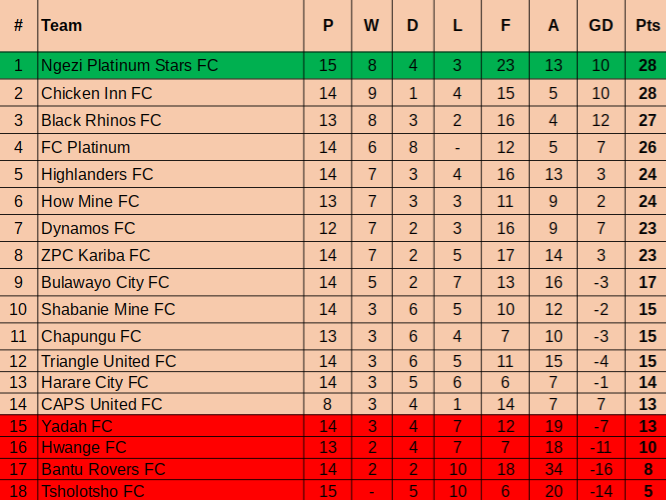