FC Platinum, Shabanie and How Mine register wins

In the Castle Lager Premiership this afternoon there were wins for FC Platinum ,Shabanie and How Mine.

FC Platinum bounced back to winning ways when they beat Chapungu 1-0 at Mandava Stadium. Gift Mbweti’s first half header was enough for Norman Mapeza’s side to collect maximum points.

FC Platinum move into third place after the win with 29 points from 16 games.

At Morris Depot Shabanie registered a second consecutive win when they beat Yadah 2-0. Dennis Dauda turning out for Yadah after his controversial move from CAPS United missed a glorious chance in the second half to put Yadah in front.

The match seemed to be heading for a goalless draw with ten minutes to go but Shabanie took the lead through a Regis Dongo own goal before Wellington Taderera added a second in the 88th minute.

At Luveve Stadium How Mine edged Harare City in a closely contested encounter. Munyardzi Diya scored from a penalty after a handball by a Harare City defender but Martin Vengasayi equalised on the 39th minute.

Kuda Mushare then grabbed the winner in the 66th minute finishing off Toto Banda’s effort.

In an early kick off Bantu Rovers and Bulawayo played out a goalless draw at Luveve. 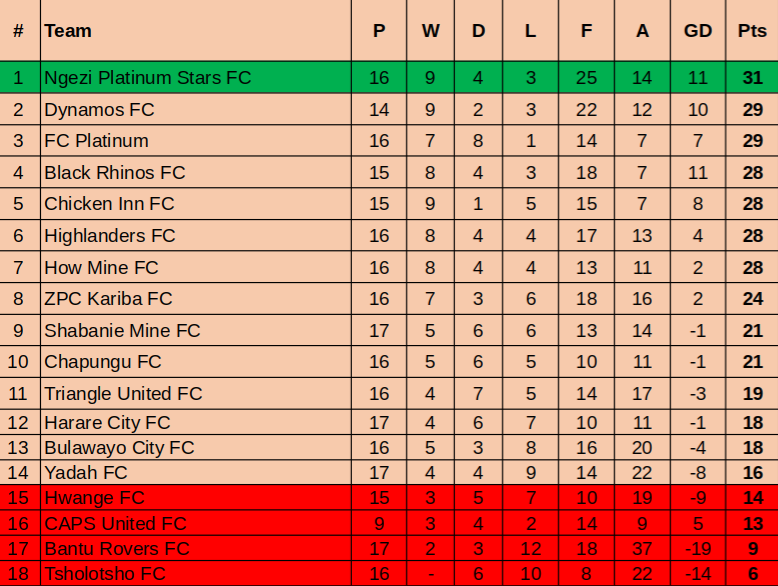