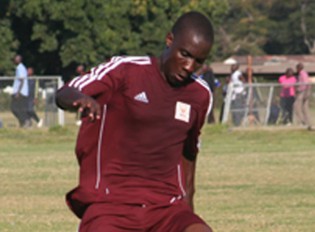 Zambian Super League side Kabwe Warriors has completed the signing of Shabanie Mine striker Nelson Maziwisa.

Maziwisa put pen to paper at the club’s offices in Zambia after impressing in a week-long test. Kabwe Warriors has been a close admirer of the former FC Platinum forward.

The Latest news was announced through a statement by Shabanie’s Public Relations department on their facebook page. Part of the statement read

We are happy to announce that our striker Nelson Maziwisa has now joined Zambian topflight side Kabwe Warriors after he succeded in the club’s trials procedure.He was issued with the clearance letter at the weekend for him to play for his new club.As Shabanie Mine Football Club we want to congratulate Nelson and wish him a fruitful and bright career in Zambia.

He becomes the second high profile player to leave the club this transfer window after Collins Duhwa departed for Chickenn In.

Mazivisa’s career began in Zvishavane with Platinum, he stayed with Platinum for five years up until 2016 when he left following the expiration of his contract.

During his time with Platinum, Mazivisa was loaned out to Shabanie Mine in 2012. His spell with the club was a success as he finished the season as the Zimbabwe Premier Soccer League top goalscorer.

Upon his return to Platinum he went on trial to two South African teams, firstly to Chippa United and then to SuperSport United but he failed to win a contract with either side. After leaving Platinum, Mazivisa completed a move to Triangle United.