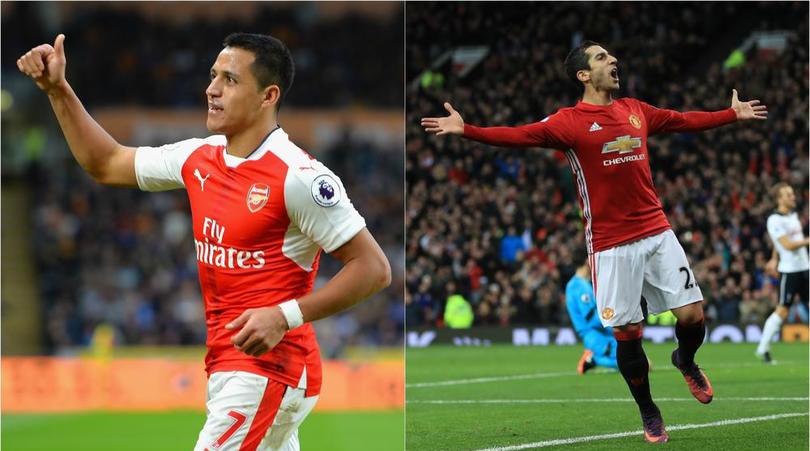 English Premier League
Henrikh Mkhitaryan is set to see his wages go up when he completes his move from Manchester United to Arsenal, the Mirror reports. The Armenia international is set to move to the Emirates in a straight swap with Alexis Sanchez. Meanwhile, Sanchez arrived at Manchester United training ground this afternoon to undergo his medical.

Chelsea have turned to Burnley striker Ashley Barnes in their attempts to bolster their forward line, according to Goal. The Blues have also been linked with Andy Carroll, Edin Dzeko and Peter Crouch in recent days.

Chelsea are closing in on the £44 million double signing of Edin Dzeko and Emerson Palmieri from Roma, claims the Mail on Sunday.

Jurgen Klopp will allow Daniel Sturridge to leave Liverpool in the January window, according to Sky Sports. The 28-year-old has been widely linked with a move to Inter Milan, while Spanish side Sevilla have also made contact with Liverpool over a loan move for the England international.

Former Manchester City midfielder Samir Nasri could be heading back to England at West Ham, according to the Daily Mail. Nasri has struggled to settle at Turkish side Antalyaspor and is open to returning to the Premier League.

La Liga
Athletic Bilbao goalkeeper Kepa had been tipped to join Real Madrid this month but it now looks as though he will stay where he is. According to AS, Kepa has grown tired of waiting for an offer from Real Madrid and will commit his future to Athletic Bilbao instead by agreeing to a new long-term contract.

Valencia are hoping to make a January move to sign Manchester United star Juan Mata, according to The Sun. The Spanish international’s future at Old Trafford is growing increasingly uncertain with the impending arrival of Alexis Sanchez to the club.

Real Madrid have told Cristiano Ronaldo that he is free to negotiate a move away from the club this summer, according to Eurosport.

Real Madrid are prepared to smash the world transfer record in order to land Tottenham striker Harry Kane, reports The Sunday Times. The Blancos have been tracking the England international for some time and are now piecing together a £200 million package in an effort to take him to Spain.

Bundesliga
Borussia Dortmund have named their price for reported Arsenal target Pierre-Emerick Aubameyang. According to Kicker, Arsenal’s opening bid of £44m has fallen short of Dortmund’s £53m valuation for the striker.

Serie A
Inter Milan are set to complete the signing of Rafinha Alcantara from Barcelona on loan with an option to buy for £30m, according to Gazzetta dello Sport.

Juventus are looking to sign Arsenal midfielder Jack Wilshere on a free transfer, according to The Sun. Wilshere’s contract is up at the end of the season, with the Gunners only willing to offer him a new deal that includes a 20 per cent paycut.

Roma are hoping to pip Serie A rivals Inter and Juventus to the signing of Manchester United defender Matteo Darmian, according to The Mirror.

France
Monaco winger Thomas Lemar is ready to snub interest from Arsenal and Liverpool after setting his heart on a move to Barcelona, claims The Sunday People.

Monaco are interested in signing Islam Slimani from Leicester City but they will have to pay close to the £28m fee that the Premier League side paid for him according to Sky Sports.

South Africa
Mamelodi Sundowns coach Pitso Mosimane has revealed that he no longer has control over whether or not Khama Billiat renews his contract with the club.