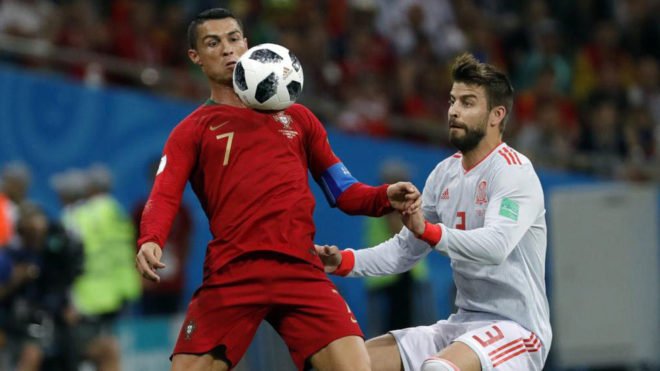 Spain defender Gerard Pique accused Cristiano Ronaldo of diving to win a penalty and a crucial free-kick in Friday’s epic 3-3 draw with Portugal and praised his side for battling back after a chaotic week in which coach Julen Lopetegui was sacked.

Ronaldo struck the first goal of his memorable hat-trick to put Portugal ahead in the fourth minute after going down in the area from a challenge from Nacho. He later converted an exquisite late free-kick to level the thrilling encounter after winning a foul following a tussle with Barcelona’s Pique.

“Cristiano is very prone to diving and they award him almost every foul,” Pique told reporters after the extraordinary spectacle in Sochi between the two heavyweights which set the World Cup alight.

“We picked ourselves up again after a lot of problems because starting a World Cup by conceding a penalty in the second minute and going behind is difficult but we scored three goals and we have to be happy with how the game went.”