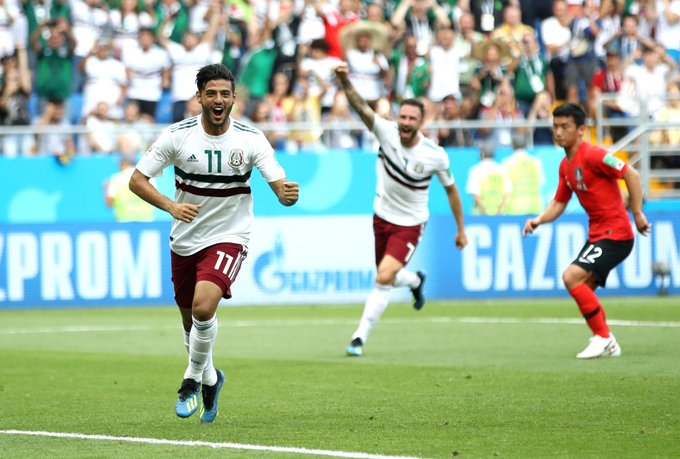 Mexico have taken a huge step towards the last-16 stage of the 2018 World Cup courtesy of a 2-1 win over South Korea in Rostov.

Mexico were awarded a penalty in the 24th minute when Jang Hyun-soo handled a cross from Andres Guardado , however, and Carlos Vela converted from the spot to send his team 1-0 ahead in the 26th minute.

Mexico had their second of the game in the 66th minute, when Hernandez collected a super pass from Lozano before finishing low into the bottom corner of the net to register his 50th international goal.

Shin Tae-yong ‘s team did have one back in stoppage time when Son curled a sensational effort into the top corner, but Mexico held on in the final moments to pick up a huge win.

The victory has moved Juan Carlos Osorio ‘s side onto six points in Group F , and they are now in a strong position to book their spot in the knockout round of the competition.

Mexico will finish their group-stage campaign against Sweden on June 27, while South Korea face the world champions Germany on the same day.