Harare City edged out fading giants Dynamos 1-0 in a derby game played in front of a paltry crowd at Rufaro Stadium on Sunday afternoon.

The Glamour Boys put on a lifeless performance in the first half where the home team dominated possession.

Ishmael Wadi broke the deadlock as early as in the 9th minute when he tapped in Takudzwa Chimwemwe’s cross to give City the advantage. The goalscorer, however, left the field five minutes later after picking up an injury.

His replacement William Manondo got a chance towards the half-hour mark but the effort was safely collected by the keeper.

Dembare continued to chase shadows and only got their first strike on the target in the 35th minute through Godfrey Mukambi who hit a tame shot which didn’t trouble the keeper. Quality Kangadzi followed up moments later with a bicycle kick which went inches wide.

The play was temporarily stopped on minute 45 when Dynamos fans started throwing missiles in protest of referee’s decision to award the Sunshine Boys a freekick on the edge of the box following a handball. The order was soon restored after some minutes but the set-piece didn’t bring any change.

The teams went to the break with Harare City in the lead.

Dembare coach Lloyd Mutasa made two substitutions in the opening ten minutes of the second period, bringing in Brett Amidu and Kudzai Dhemere for Kuda Kumwala and Gift Saunyama respectively. The changes proved effective as the visitors started to dictate the pace in the midfield.

City went under pressure and could have conceded in the 65th minute, but a double save by keeper Rayn Harrison saved the day.

Harrison came back with another brilliant stop towards the end of the game when he went airborne to deny Amidu’s header.

The hosts held on to their advantage until the last whistle as they completed a double over their city rivals.

Tafadzwa Jaravani opened the scoring in the 12th minute before Wellington Taderera (41′) and Allen Gahadzikwa (45′) stretched the lead before the half time.

Gahadzikwa completed his brace on the hour to make it 4-0 while Lot Chiunga (65′), Masimba Mambare (67′) and Macdonald Makuwe (71′) also managed to put their names on the scoresheet as Chauya Chipembere recorded the biggest win by any team in this season.

In Bulawayo, Triangle beat Chiefs while the Midlands Derby played at Ascot Stadium ended in 1-1 draw. 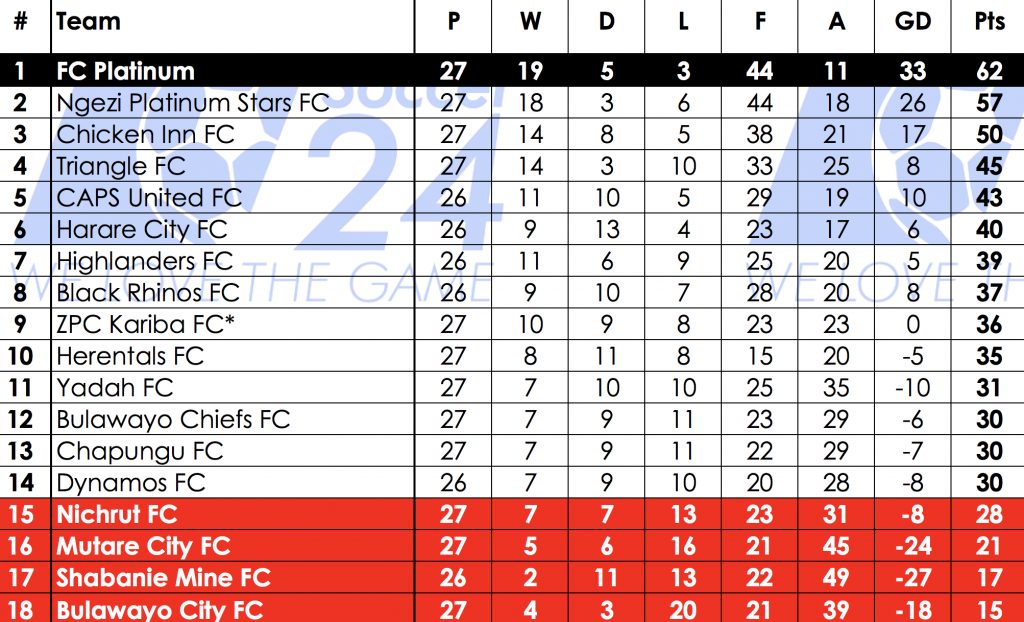