Dynamos new coach Lloyd Chigove started his tenure with a 2-0 loss against FC Platinum at Mandava Stadium on Saturday afternoon.

Chigove took over from Lloyd Mutasa who was sacked on Thursday after a string of poor results.

The defeat inflicted more misery to the troubled giants who are still facing relegation danger and are now in the 14th position on the log.

Pure Platinum Play took control from the first whistle and were able to grab an advantage as early as in the 8th minute through Mkhokheli Dube who converted William Stima’s pass.

Dembare kept on struggling to get hold of the ball and conceded another goal in the 24th minute when Rodwell Chinyengetere’s left-footer hit the roof of the net. They only found their feet on the half-hour mark when Tawanda Macheke’s shot was saved by the keeper.

The introduction of Blessing Moyo who replaced Macheke in the 32nd minute also brought some mobility on the midfield but the first half ended with the hosts still having a two-goal cushion.

The Glamour Boys resumed the action, picking up from where they left before the break. They created some chances and got a couple of setpieces which were all wasted.

Midfielder Quality Kangadzi, however, went closer than anyone in the second period but his header hit the upright on minute 75. Marvellous Mukumba also got a glorious opportunity later in the game, but he failed to connect Ocean Mushure’s cross.

The game ended as log leaders FC Platinum re-opened a five-point gap at the top thanks to Ngezi Platinum Stars who lost to Bulawayo City.

Amakhosi secured the shocking victory courtesy of Keith Murera’s own goal in the 14th minute. The result ended City’s eleven-match winless run and is the first triumph for coach Bekithemba Ndlovu who took over the reins in August.

They have moved one place up to the 17th position.

Elsewhere, Black Rhinos beat Triangle United 3-1 while across the town Harare City and Chicken Inn played to a goalless draw. 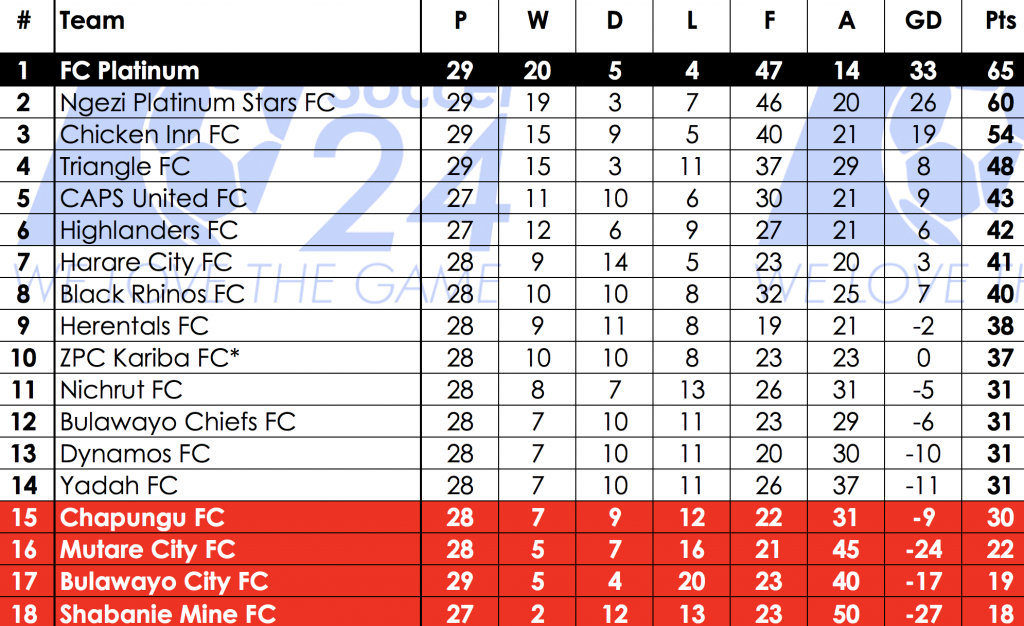