FC Platinum beat Shabanie Mine 0-1 in a Zvishavane Derby played at Maglas Stadium on Sunday to clinch the 2018 Castle Lager Premier Soccer League championship for the second successive season.

Pure Platinum Play have now amassed an unassailable 74 points, thanks to a second-half strike by substitute Devon Chafa.

The game had dull opening minutes with both sides failing to make clear-cut chances. The visitors picked themselves up and started commanding the pace. They were denied by the woodwork on minute 23 when Mkhokheli Dube’s header crashed against the crossbar.

Shabanie only found their feet towards the end of the first period but could not get any attempt at goal.

The match went to the break with the teams tied in a deadlock.

The second half also had a cagey start with the first meaningful opportunity coming on the hour when Maxwell Murimi shot wide following a rare build-up by the hosts.

FC Platinum, nonetheless, grabbed the lead on the 75th minute courtesy of Chafa’s beautiful left-footer. The goal was the midfielder’s first since joining the side in the mid-season transfer window.

As the clock ticked away, Shabanie Mine wasted a glorious chance to level terms when Joseph Sibanda struck off target with only the keeper to beat.

The game ended in favour of the visiting team who won the title with two games left.

Ngezi Platinum who were the title rivals will now finish the season in second place despite beating Bulawayo Chiefs 2-0 at Baobab Stadium.

Marlon Mushonga (55′) and Micheal Charamba (86′) scored the goals for Madamburo.

In Bulawayo, goalkeeper Ariel Sibanda was on target for Highlanders in a 2-0 victory over Harare City.

Sibanda converted a penalty in the 36th minute after Tinashe Makanda was fouled inside the box to double the lead which came ten minutes earlier.

The first goal came from Makanda who hit a brilliant strike from outside the box. 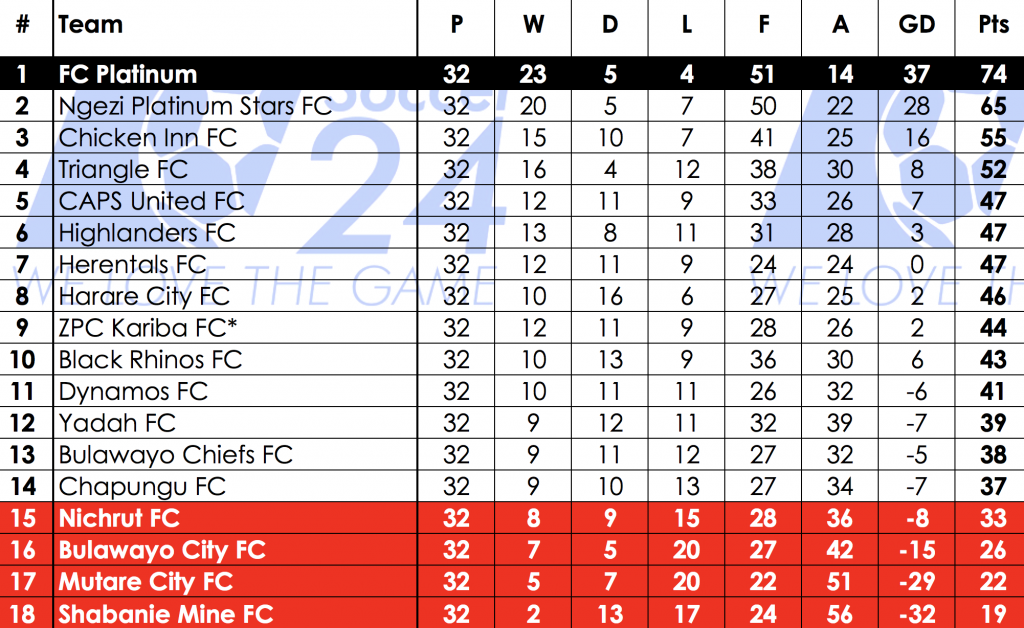