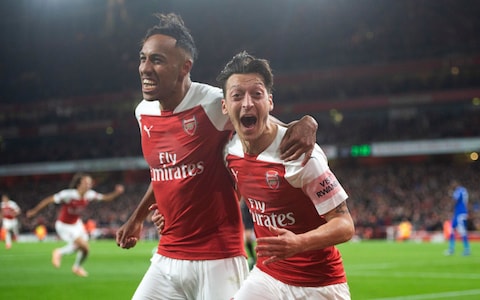 A host of Arsenal players have been accused of taking ‘hippy crack’ (nitrous oxide) at a pre-season party in August.

A video released by The Sun, a UK newspaper, on Thursday night shows Mesut Ozil, Matteo Guendouzi and Pierre-Emerick Aubameyang using balloons apparently to inhale the gas that can cause feelings of euphoria, hallucinations, fits of giggles and laughter and even passing out if taken excessively.

German defender Shkodran Mustafi was also seen in the footage but was not filmed having any nitrous oxide, while defender Sead Kolasinac, 25, is another among those on camera.

The Arsenal players, if the claims are true, would not be the first to be seen using the gas which can cause severe side-effects especially to athletes.

The other Premier League players that have been embroiled in a “hippy crack” storm in the past are Raheem Sterling, Saido Berahino and Jack Grealish. In 2013, Kyle Walker apologised after he was pictured taking nitrous oxide.