FC Platinum could get a tough draw on Friday for the group stage of the Caf Champions League.

The draw will be held at the Caf headquarters in Egypt. The sixteen remaining teams will be divided into four groups of four with the matches beginning as early as the weekend of January 11-12.

The top two finishers after the last group game on the weekend of March 8-9 will advance to the quarter-finals with the final over two legs at the end of May and beginning of June.

The Zimbabwe champions are in pot 3 along with South African side Orlando Pirates, Asec Mimosa of Ivory Cost and Constantine of Algeria.

Any team from Pot 1 will be a tricky opponent for the Norman Mapeza-coached side as they could be drawn in the same group with the current title holders, Esperance of Tunisia, Congolese giants TP Mazembe, Al Ahly of Egypt or 2017 champions Wydad Casablanca of Morocco.

From Pot 2, 2015 winners Mamelodi Sundowns and AS Vita of DRC are the two biggest threats but the remaining two, Horoya (Guinea) and Club African (Tunisia) cannot be spared as they have also left a mark in the Caf inter-club competitions in recent seasons.

No big names in Pot 4, but FC Platinum should be wary of the upset these small teams might cause.

Meanwhile, Friday’s draw will also include the third round of the Caf Confederation Cup! where the 16 teams through meet the 16 sides who lost in the last round of the Champions League. However, there is no Zimbabwean team in the tournament. 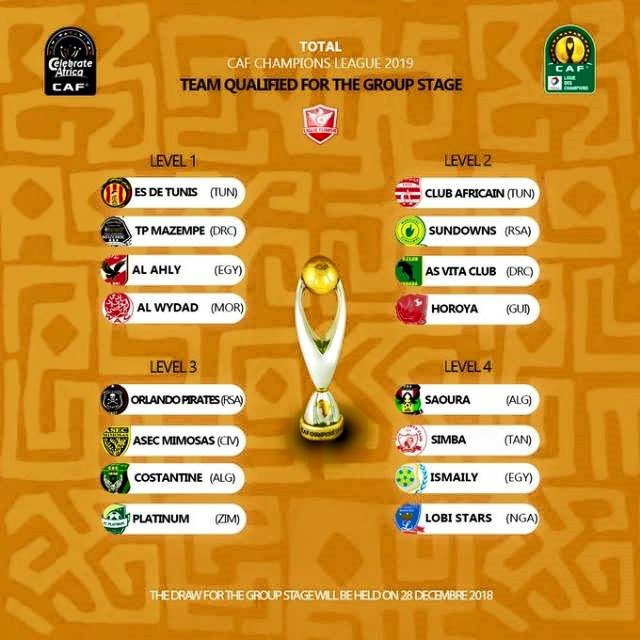