Harare will host six teams in the 2019 Castle Lager Premier Soccer League season, more than any city or town in the country.

Highlanders, Bulawayo Chiefs and Chicken Inn are the only teams from Bulawayo. The city had four clubs in the previous campaign but the relegation of Bulawayo City left it with three.

Gweru follows with two teams after the promotion of TelOne.

It still remains unclear if Mutare will host any PSL games this season as Sakubva Stadium is yet to get any upgrade so that it can hold league matches. Newly-promoted Manica Diamonds who are the only side from the Eastern Highlands city could be forced to play their home games in Rusape just like what happened to Mutare City Rovers last season.

Meanwhile, top flight football returns to Bindura for the first time in twelve years, thanks to Mushowani Stars who won the Northern Region Division One Championship. Since Mwana Africa got relegated in 2007, Mashonaland Central Province has not hosted any league match. 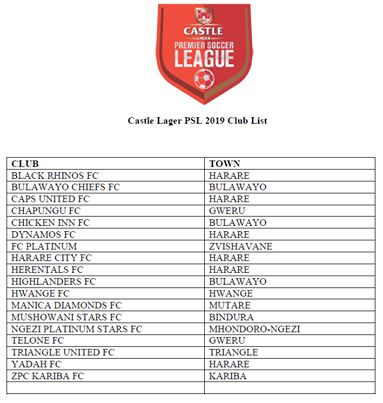