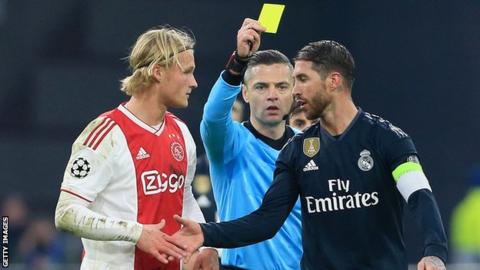 Sergio Ramos’ suspension has been extended to two games after Uefa found him guilty of “clearly receiving a yellow card on purpose” during Real Madrid’s Champions League tie at Ajax.

Ramos fouled Kasper Dolberg in the 89th minute with Real 2-1 up, meaning he is suspended for the last-16 second leg.

Uefa opened an investigation and gave him an additional one-match ban for obtained a booking deliberately.

The booking had reduced Ramos’ chances of missing a potentially more important match later in the competition, as all bookings are wiped following the quarter-final stage.

Following the Uefa decision, Ramos would be unavailable for the first leg of the quarterfinal tie that is if Madrid manage to progress to the last eight round.