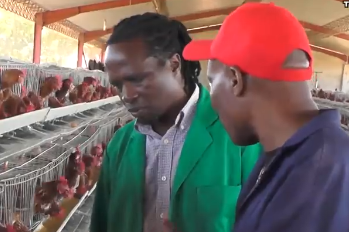 Former Warriors coach Charles Mhlauri is now into poultry farming after returning from the USA.

Mhlauri spent twelve years in America where he was the director of coaching at a soccer academy before coming home to start a chicken project in Bulawayo.

Speaking to Thandazani Zimbwa of Television Sport Media, the two-time PSL winning coach said his project should be a reminder to both former and current players that they need forward planning as football careers don’t last long.

“When I was coaching, I used to tell my players to plan ahead,” said Mhlauri. “All teams I have coached, I always told my players to go back to school or get a qualification because soccer life has a short life span.

“I have seen professionals, not only in Zimbabwe but the world over, who make millions but when their careers end, it becomes a pathetic scenario.”

Mhlauri says he has been leading by example and brought some players to his farm so that they get a reality check.

“I always try to lead by example, I have brought a few of my players here, and I would love to see them doing the same thing.

“I’m happy with Mkupali Masuku who is doing well in Gwanda. To me, that’s good planning, and I want all these players to have a life after their soccer careers.

“We can do better if we can equip them with the right education,” he added.

Mhlauri who also coached Amazulu and Masvingo United won back-to-back titles with CAPS United before leading the Warriors to their second-ever Afcon tournament in 2006. He is still in football and now has an academy in the USA called CM International.