Warriors coach Sunday Chidzambwa has given his thoughts on the decision by CAF ordering a replay of the second leg of the Champions League final.

Esperance were crowned the winners of the competition in a controversial fashion after Wydad Casablanca refused to finish the second leg encounter in protest over their disallowed goal. The Moroccans wanted the video assistant referee to check if the goal should stand but the system was not working.

CAF then held an emergency meeting last week and ordered a replay of the encounter at a neutral venue.

According to Osasu Obayiuwana, a Nigerian BBC Football journalist, Chidzambwa thinks the verdict could have been different if the final had involved a team from Sub-Saharan Africa.

“It appears the Arabs are in total control of football in Africa… If the final had been played between a North African team and one from South of the Sahara, and the latter team walked out of the pitch, would CAF have ordered a replay?

“Because the game was between two powerful North African sides, CAF decided on a fudge. What they have done clearly goes against the laws of football. If a team abandons a game, they lose the game. That is the rule.” 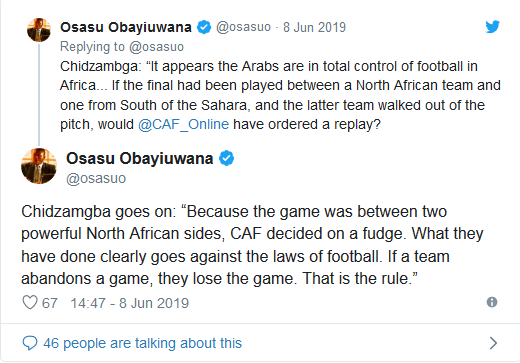 The replay will be held on a date and venue to be determined later by the CAF Executive Committee.