Warriors fan Alvin Zhakata has not been in contact with anyone in the past days, according to football commentator Steve Vickers.

Zhakata’s last reported location was in Ethiopia on his way to Egypt by road to support the Warriors during the 2019 Afcon.

Vickers who is in Egypt covering the tournament says he got in touch with Zhakata’s manager Promise Chabata and was told the Warriors fan has not communicated in the past few days.

Chabata says he has even tried to speak to officials at Zimbabwean Embassy in Ethiopia but nothing has materialised.

“Very worried at the moment. I had expected Alvin to have contacted me by now. I spoke to Zim Embassy in Ethiopia, so far nothing is forthcoming,” Chabata told Vickers. 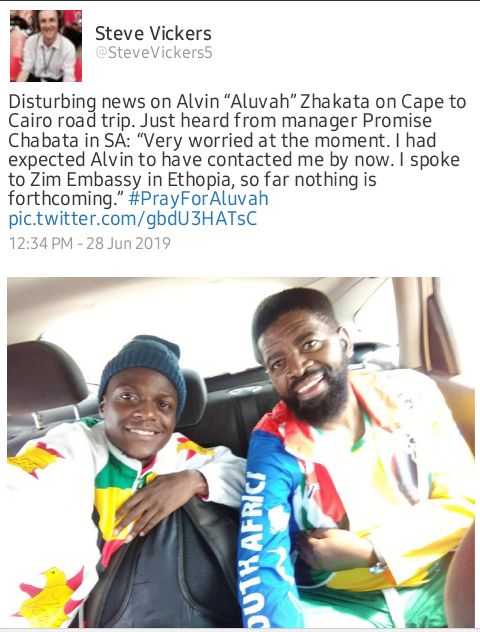 Concerns over Zhakata’s safety emerged last weekend following an attempted coup in Ethiopia which claimed the lives of army boss, Gen Seare Mekonnen and his advisor.

The attempted coup happened in the northern Amhara region where Alvin’s route into Sudan passes through.