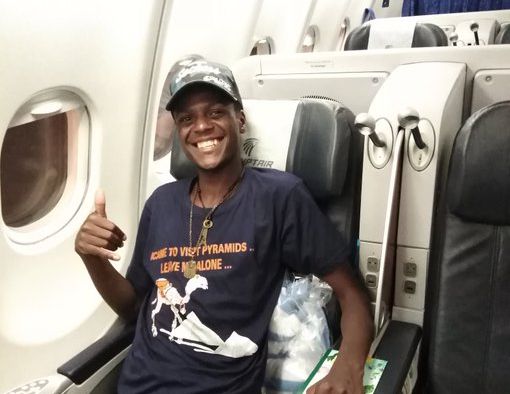 Alvin Zhakata is set to arrive home around midday after finishing his extended stay in Egypt.

The Warriors superfan had travelled to North Africa by road to watch the Warriors in action at the 2019 Afcon tournament.

The adventure started in Cape Town, South Africa with Msila Botha who gave up before crossing into Ethiopia.

Zhakata finished the strenuous journey alone and only arrived ten days after Zimbabwe’s elimination from the competition.

Despite missing the Warriors’ games, the superfan managed to draw the attention of CAF who rewarded him with an all-expenses paid stay at a 5-star hotel and a VVIP ticket to watch the final which featured Senegal and Algeria.

The football body also paid for his flight back to Zimbabwe.

Zhakata is scheduled to touch down at R.G Mugabe Airport at 11:45am.