Mosimane comments on reports linking Billiat with return to Sundowns 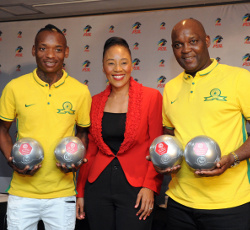 Mamelodi Sundowns coach Pitso Mosimane has commented on the alleged interest in re-signing Khama Billiat, saying the club will negotiate with Kaizer Chiefs if they want the player.

The Zimbabwean winger has of late been linked with an exit at the Soweto giants and Sundowns are reportedly interested in taking him back.

Billiat left Masandawana at the end of the 2017/18 season and joined Chiefs as a free agent.

Speaking at a presser on Monday, Mosimane, however, did not confirm if his side are indeed interested in signing the 28-year-old.

“I should be very careful on this issue because I need to respect Kaizer Chiefs, they are a big institution and if they complain to the league they will fine me for poaching their player because he is a Chiefs player,” said Mosimane, according to Goal.com.

“If we want Khama, we speak to Chiefs and then they will tell us if they are selling or not. But sometimes if you are not selling, even Lionel Messi has a price. If someone says they will give me $1 million a month, I think I will be gone.

“Everybody has a price. We can always say we don’t have a price but even my players have a price… If we want Khama, it must be from club to club,” he added.