Brazilian forward Neymar, who is the midst of transfer speculation to Real Madrid or Barcelona, has shared an old picture of him and Zinadine Zidane, a move that has gotten many tounges wagging.

The want-away PSG star, whose ambition to leave the French champions is well-known, is wanted by both Los Blancos and the Catalans.

Madrid reportedly offered PSG €120 million plus Balon do’r holder Luka Modric in exchange for Neymar two days ago, with reports in Spain  even suggesting that they are now the favorites to land the 27-year-old.

The picture Neymar shared of him and Madrid coach Zidane, was taken in 2012 during a Friends of Ronaldo (Brazilian) and Friends of Zidane Charity match. It was originaly posted by Colombian striker Radamel Falcao and the Brazilian shared it. 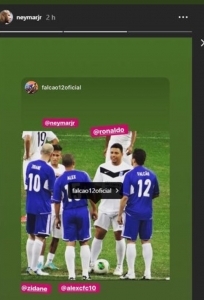