Zimbabwe vs Botswana: Everything you need to know

The Warriors begin their 2021 Afcon Qualifiers this evening when they host Botswana in a Group H encounter at National Sports Stadium in Harare.

Kick-off time
The match will start at 6 pm, concurrently with other Afcon Qualifiers across the continent.

Venue
The game was initially set for Barbourfields Stadium in Bulawayo but Zifa decided to move it to the capital.

The tie will be played at National Sports Stadium, and the tickets are ranging from $20 to $120.

How to follow the game
DSTV was supposed to show the match live on their SuperSport channels but due to content rights issue at CAF, the pay TV will no longer broadcast the game

ZBC TV haven’t stated their position yet while CAF are yet to inform about any streaming channels.

Soccer24 will bring you live updates of the encounter.

Warriors team news
Left-back Divine Lunga will not be available for the game after picking up a groin injury during a training session on Thursday. Ronald Pfumbidzai is now expected to start in his position.

Also unavailable for the match are Tinotenda Kadewere who sustained a knock last weekend and Macauley Bonne who also withdrew on medical grounds.

Elvis Chipezeze is likely to start in goals while Alec Mudimu, Teenage Hadebe, Knox Mutizwa, Khama Billiat, Knowledge Musona and Marvelous Nakamba are some of the infield players expected to feature in the first XI today.

Botswana team news
The visiting side is largely composed of locally-based players.

The selection has only six foreign-based stars including two from Europe – Mpho Kgaswane who is at Azerbaijani side Zirah FC and winger Kabelo Seakanyeng, from Malta’s Lijah Athletic.

The other four play in South Africa and these are TS Galaxy duo of goalkeeper Ezekiel Morake and Mosha Gaolaolwe, Mogakolodi Ngele of Black Leopards and Highlands Park’s Lesenye Ramorake.

About Group H
The group is made up of reigning African champions Algeria, Zambia, Zimbabwe and Botswana.

Algeria currently hold the edge in the pool after beating Zambia 5-0 on Thursday.

The winner in today’s encounter between Zimbabwe and Botswana will determine the final standings after Match-day 1. 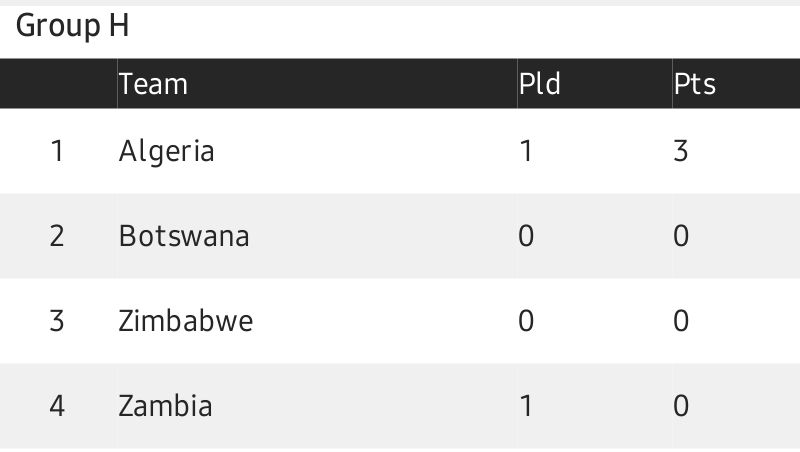