The issue regarding Warriors defender Teenage Hadebe’s passport, which has seen the centre-back stuck in Bulawawo nearly a week after the international break ended, has made it’s way into the Turkish media.

Hadebe, who plies his trade in Turkey for Yeni Malatyaspor, is having difficulties in getting a new travelling document after the old one ran out of pages and the issue has sparked a lot of debate with some suggesting that the Sports Ministry should chip in since the defender intitially came home to represent the country.

Malatyaspor-based sports publication Ajansspor, ran the story of the Zimbabwe international’s predicament with fans responding to it with shock on microblogging site Twitter.

Instabul based Skorer TV, also published the story of the 24-year-old’s situation. 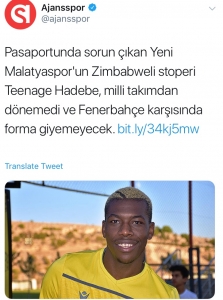