The Ndlovus- Zimbabwe’s own version of sibling delight 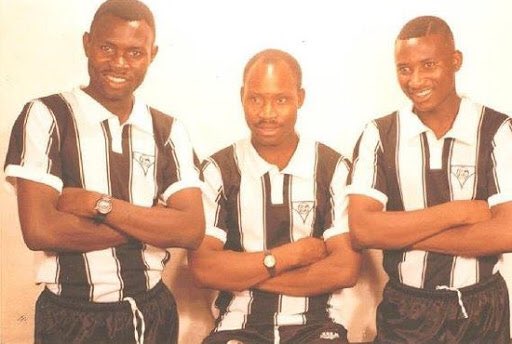 It doesn’t happen often that as a football player, in front of 60 000 people, you dribble past two defenders, flight in a brilliant cross in the box, which is met by a sublime diving header by your very own brother, to put your country in front.

That is what happened in 2003 at the giant National Sports Stadium when Zimbabwe took on Mauritania. Peter Ndlovu fed his brother, the late Adam, to thrust the Warriors ahead.

What followed the goal was one of the most remembered moments in national team football history, Adamski’s hilarious machine gun celebration which led to goalkeeper Energy Murambadoro getting injured.

While the country’s is blessed with an array of siblings to have played for the Warriors, from Sunday and Misheck Marimo (Chidzambwa), to Cain and Abel Muteji, to Wilfred and William Mugeyi, to Knowledge and Walter Musona, admittedly the Ndlovu siblings, Peter, Madinda and Adam, are a cut above the rest.

Madinda, the eldest of the three, was a highly- talented winger during his heydays from independence to the mid-1990s.

Adam, a centre-forward,  who represented Zimbabwe 34 times between 1992 and 2004 and was part of the Warriors squad which stepped on Tunisian soil for the country’s maiden AFCON finals appperance, died in December 2012 in Victoria Falls in a car crash while travelling with Peter, who survived the accident.

Peter himself, is arguably the greatest Warrior of all time. He is Zimbabwe’s most capped player, having represented the country a record 100 times and is also the all time leading gaolscorer with 38 goals.

The ‘Flying Elephant’, as Ndlovu is affectionately known in Zimbabwe, is also the first African player to grace the English Premier League whe he made the historic move from Highlanders to Coventry City in August 1992.

Holland has Ronald and Erwin Koeman, Ivory Coast has Kolo and Yaya Toure, England has Gary and Phil Neville, Spain has Thiago and Rafinha Alcantara, Belgium has Eden and Thorgan Hazard; Zimbabwe has Madinda, Adam (the late) and Peter Ndlovu.