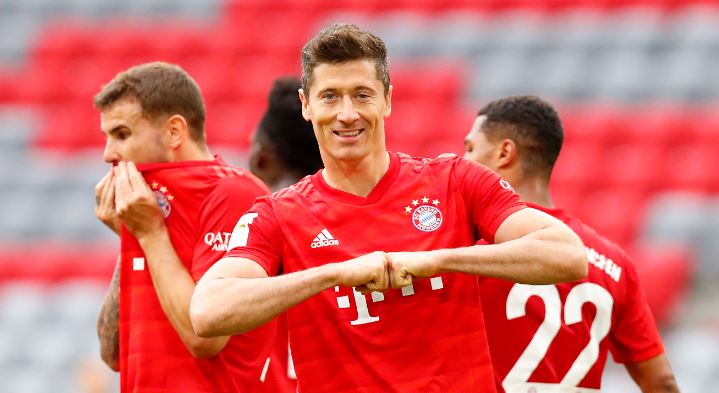 Robert Lewandowski bagged a brace as Baryen Munich made a huge step closer to their 8 consecutive Bundlesliga title with a comprehensive 5-0 win over Fortuna Düsseldorf at the Allianz Arena on Saturday.

Fresh from a crucial victory over title rivals Borussia Dortmund last week, Hans-Dieter’s charges were looking to continue their title chase and made light work of relegation-threatened Düsseldorf to go ten points clear at the summit of the German top division.

Düsseldorf‘s Danish center back Mathias Jattah-Njie Jørgensen beat his own goalkeeper to break the deadlock for Baryen in the 15th minute before Benjamin Pavard doubled their advantage in the 29th minute.

Lewandowski made it 3 on the stroke of half time as it was one way traffic, 3-0 Baryen at the interval.

The Poland international got his brace five minutes after the restart and then Alphonso Davies completed the route minutes later.

Dortmund have a chance to reduce the points gap to seven when they face bottom-placed Paderborn  on Sunday.