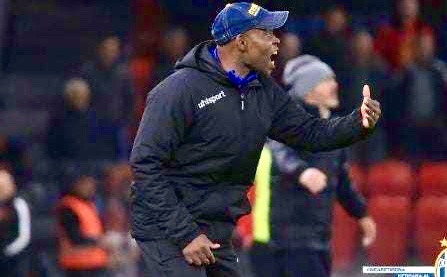 A Nigerian has made history by becoming the first African coach to lead a European team to a league title.

Ndubuisi Egbo, 43, lead Albanian side FK Triana to the 2019/20 league title last weekend, seven points ahead of the chasing pack, guiding his side to the 2020/21 UEFA Champions League qualifying round in the process.

The former Super Eagles goalkeeper has vowed that his side will not participate in Europe’s premier club competition just to listen to the Champions League  anthem but to make progress.

”When I took over, I had people praying for me and we had prophetic declarations that we were going to be champions. That was our major objective and not the Albanian Cup, but if we win it will be double joy,” he told Nigerian publication Vanguard Sport.

“On the champions league next year. It is the dream every fan, player and coach for their club to play in Europe.”

“The Stadium atmosphere is electric, the fans, the melodious anthem. We are not going there only to enjoy the anthem but to win and reach the group stages,” he added.