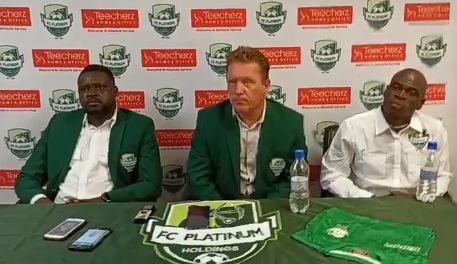 FC Platinum say they are weighing a number options on their hand to ensure their CAF Champions League campaign happens with ‘minimal disruption’.

The Platinum Boys will be without Pieter de Jongh during their games after CAF barred him from sitting on the team bench in all the team’s encounters in the 2020/21 season.

FC Platinum will face Costa do Sol of Mozambique in the preliminary round. The Zimbabwe champions will travel first for the first leg between 27-29 November before hosting their opponents in the following week.

“The FC Platinum Board and Executive Management have met over the decision by CAF not to give a special dispensation to coach, Hendrikus Pieter De Jongh, to sit on the team’s bench during Champions League matches as he does not have a CAF A licence.

“While we are concerned about the potential effects of this move, in the short term we are confident that our club has options to ensure that the upcoming matches in the preliminary round against Costa do Sol of Mozambique will go on with minimal disruption.

“To ensure our long term competitiveness, we are assessing a number of options to enable the team’s capacity to perform at domestic and CAF competitions.”