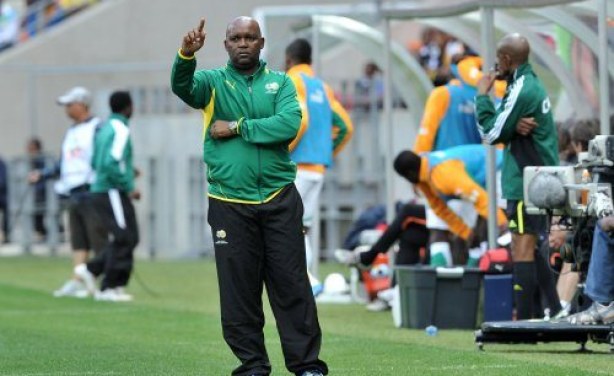 Pitso Mosimane has opened up about the reason behind his sacking as the head coach of Bafana Bafana.

The gaffer was in charge of the South African national team for two years from 2010 – 2012. His sacking has always been believed to have emanated from failing to qualify for the 2012 African Cup of Nations.

But Pitso says there was a hidden agenda following a fallout with the South African FA.

Speaking on SuperSport TV series, In Conversation, the former Mamelodi Sundowns coach and current Al Ahly boss explained what was happening behind the scenes and how media influence affected his tenure at the helm of the national team.

He said: “My biggest mandate was preparing the team for the World Cup qualification and me being myself I prepare the hardest way.

“If you study hard, the exams should be okay. If you train very hard every day the game comes out much better because you have been training very hard. So that’s me.”

“My preparation was very hard and unfortunately the vision is not properly shared from the top with our football association. The vision was to qualify for the World Cup and only five teams qualify from Africa

“If you have to be among the top five to qualify for the World Cup, which was expected of me, there is Nigeria, Senegal, Egypt, and the North and West Africans. Those are the teams that qualify, forget about everyone else, once in a while you will have a team from the SADC, it’s only South Africa.

“So what did I do? I picked the top five countries in North Africa, Senegal, Ghana, Ivory Coast, all those big teams to play friendlies. The outcome in the matches against these big guns were all draws and no wins, then the media started asking if I was the right guy to lead us to the World Cup.

“I said guys, I can go to the weakest teams in the continent and win 5-0 then you will be saying the team is ready but it was the vision of a coach against that of the association.

“Even one NEC member of the football association said to me, I think you are digging a grave for yourself. Why can’t you play the smaller teams win and turn this thing around? I said, the exam will be tough so I can’t be reading a lower standard book when I know at the end of the day the exams will be tough. I was sacked for failing to win the six games, I got six draws but the funny part in my two years in charge I only lost two games.

“The football association felt I was not the right guy and I said I have learnt a lot from Carlos Parreira, who has won World Cups three times, in Holland and Germany. Give me a chance I can fix this it’s only draws against top nations not losses.

“I also made a statement that I am one of the best coaches in Africa and I was crucified in the media. The Sunday papers had all the headlines asking who does this guy think he is and I said, I think I am. I begged the football association to leave me to complete the work but I was sacked,” said Mosimane.