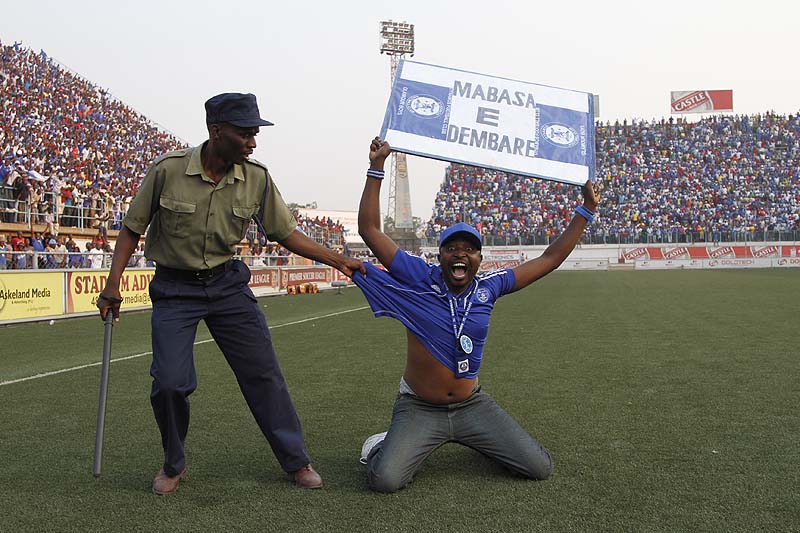 Unlike nowadays when the Castle Lager Premier Soccer League clash between Harare giants Dynamos and CAPS United is just an ordinary football match, years ago it used to bring the capital city to a standstill.

The once-mighty, unmissable and usually blockbuster clash was, once upon a time the answer to whether Harare is blue or green.

The atmosphere in the build up to it was intriguing; traffic congestion on exit points from the central business district to Rufaro or the giant National Sports Stadium, hooting cars with fans on their way to the venue and brisk business by vegetables vendors selling cabbages to CAPS fans, were the order of the day.

Fans from the green half of the capital would say green represents nature while their counterparts from the blue side would boast that the sky, which covers everything, is blue.

Unfortunately, all that flare has vanished into thin air and the derby is just an ordinary football match that very few wait for.

For actor and comedian Tendai Maradze, who starred in popular television show Timmy naBhonzo and also a Dynamos fan, the derby losing it’s glamour is down to players not being loyal to the two clubs; easily moving from DeMbare to CAPS or vice versa, something which rarely happened in the past.

“These days we have lost loyalty and authenticity baba,” opines Maradze.

“We have become too commercial and lost that deep love for the two clubs such that players cross to the other side easily. You see there is this unique value a player gives when he is loyal to a club but if one is at CAPS this season then at Dynamos the next then all that won’t happen,” he explained.

“Loyalty wise, the last crop to be was that of  Gaza (Desmond Maringwa) and Murape Murape for DeMbare, who never crossed the river to go to other side, while the same can be said of  the likes of Lloyd Chitembwe. Those kind of players would play their hearts out during the derby, something which is lacking now,” added Maradze.

Maradze’s words are echoed by one Tawanda Muthali, who believes players nowadays no longer do enough to keep the derby interesting.

“Nowadays ,some players from both sides have never played against each other before at junior level, so the derby somehow loses its competitive edge because one player seems not to care about his opponent’s background or how important the derby is to their club,” he said.

The clash used to attract huge crowds as fans thronged Rufaro to back the two teams, something which no longer happens and for one Nobert Basvi, a sports journalist, its due to lack of interest for the local premiership by football fans.

“Well I think the love of European soccer has contributed a lot to the lose of flare. Many people no longer follow local football. Gone are the days when young players used to love to play for their local team but now they dream of playing abroad. The same applies to local supporters ,they no longer follow local soccer because it’s no longer screened live on Ztv ;or Supersport. Also the two Harare giants are no longer competitive.  FC Platinum dominates the local league, making the derby somewhat irrelevant,” said Basvi.