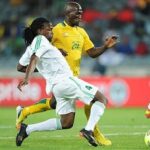 Felix Chindungwe was voted among the best twelve soccer stars in the 2012 Castle Lager PSL season. He earned recognition after posting an impressive defensive performance during the year.

He has been a vital cog in the Warriors senior national team’s campaign for the World Cup, Cosafa and CHAN.

Family: I am married to Albertine Duwo. We have one child Nicole

Career Road: I started off at Mahlabezulu Primary school. By then I was in grade 3. I then went to play in lower division league for Low Cilff, Tagarira. My next moves were to Underhill and Shooting Stars.

Best Moment: To be chosen amongst the best 12 footballers in the 2012 Castle Lager season.

Worst Moment: When we lost the Cosafa cup to Zambia this year.

Best Coach: It has to be the late Lindile Dube. He was the first coach to give me my first cap in the Premier league

On the Future: I want to play abroad and with God willing, I look forward to more years still playing football.