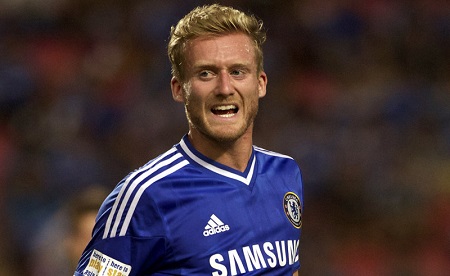 In the EPL Chelsea and Liverpool both won whilst Arsenal lost to stoke City.

Log leaders Chelsea opened a four point lead at the top when they beat Fulham 3-1. Andre Schurrle scored a hat-trick. The German international scored his the hat-trick in the space of 16 minutes in the 2nd half after the 1st half ended goalless.

Fulham got a consolation through Johnny Heitinga but the damage had already been.

Arsenal suffered a setback in their race title after they lost 1-0 to Stoke City at the Britannia Stadium. Jonathan Walters’s 76th penalty was the main difference after Laurent Koscielny had handled inside the box.

Liverpool continued their title pursuit with a 3-0 win over Southampton. Liverpool went into the match needing to keep up with Chelsea who had won earlier and take full advantage of Arsenal’s 1-0 loss to Stoke.

Luis Suarez opened the scoring before substitute Raheem Sterling made it 2-0. Steven Gerrard added the third with a penalty to lift Liverpool onto third four points behind Chelsea and above Arsenal on goal difference.

In other matches Romelu Lukaku came off the bench to score a late winner for Everton against West Ham,while there was controversy as Newcastle head coach Alan Pardew was sent off for headbutting Hull’s David  during his side’s 4-1 victory.

Pardew clashed with Meyler after the midfielder collided with him in an attempt to retrieve the ball to take a throw-in.