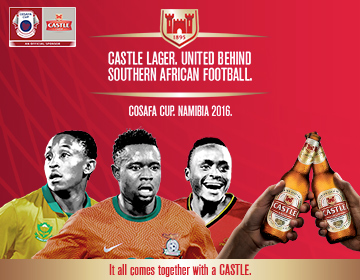 The 2016 Cosafa Cup tournament will be hosted by Namibia according to the organisers of the tournament.

Castle Lager has also returned as a title sponsor of the tournament. Speaking at a function to unveil the 2016 tournament COSAFA President Suketu Patel paid tribute to the Castle Lager brand for their investment in football in the region over the years

‘We are delighted that the future of the COSAFA CUP is secure and would like to extend our sincere thanks to Castle Lager for believing in the excellent development role that the competition plays in Southern Africa, recognising the value of the platform which the annual tournament provides to the Brand and displaying their confidence in COSAFA as an organisation.

Namibia are the current holders of the tournament after winning the 2015 edition. The tournament will be staged from May 15-29 and be hosted at two venues in Windhoek – the Sam Nujoma Stadium and Independence Stadium.