Arsenal beat Manchester City to keep up with Leicester 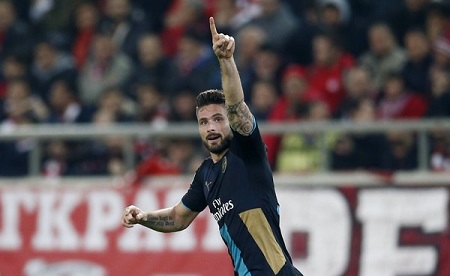 Arsenal sent out a statement of their title ambitions when the beat Manchester City 2-1 at the Emirates Stadium.

Man City had the better start with De Bruyne coming close to the opener but it was Arsenal that took the lead through Theo Walcott.

Walcott received the ball from the impressive Mesut Ozil and let out a curling shot that beat Joe Hart to score.

Just before the halftime break Ozil provided another assist this time to Oliver Giroud whose effort went through Hart’s legs to make it 2-0 to Arsenal.

In the second half Arsenal have several chances to add more goals but were guilty of missing with Campbell,Ramsey,Giroud all coming close.

With time ticking for Manchester City they got themsleve back into the game with a well taken goal by Yaya Toure.The goal unsettled the Gunners and City pressed for an equaliser as the game came to an end.

However Arsenal  had just enough to register the win that puts them two points behind log leaders Leicester. Manchester City remain in 3rd place with 32 points after 17 games.