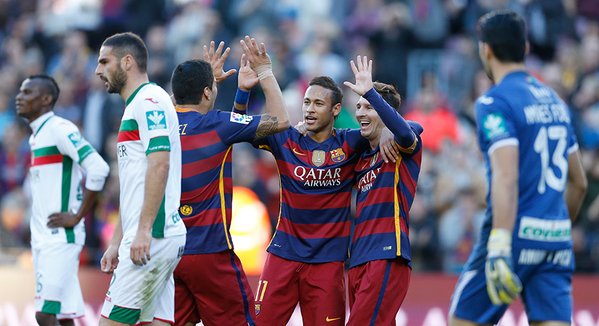 The Argentinean opened the scoring in the 8th minute after a cut back from Arda Turan who was making his league debut for Barcelona.

In the 14th minute Messi made it two nil scoring into an empty net after some fine work from Luis Suarez.

Halftime came with Barcelona in total control and Granda struggling to cope. It was not to be as Messi scored his hat-trick in the 58th minute when  Neymar’s shot bounced back from the post into his path and made not mistake putting it in.

Seven minutes from time Barcelona made it 4-0 with Neymar lifting the ball over the keeper and scoring. It was the 15th goal of the season for the Brazilian and puts him joint top goal scorer with Luis Suarez.

The win saw Barcelona return to the top of the Spanish La Liga moving to 42 points one more than second placed Atletico Madrid and five ahead of 3rd placed Real Madrid.

Both Atletico Madrid and Real Madrid are in action later today.