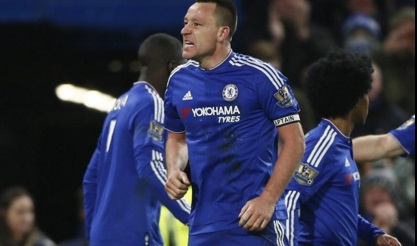 In the English Premiership today there were big wins for Manchester City and Tottenham while Chelsea and Everton played a thrilling but controversial draw.

Manchester City went to the top of EPL log table with clinical 4-0 win over Crystal Palace . City went in front in the 22nd minute through Fabian Delph before Sergio Aguero scored a brace and David Silva added a 4th.

At White Hart lane Tottenham came back from a goal down to hammer Sunderland 4-1.Patrick van Aanholt gave Sunderland the lead but it was short lived as Christian Eriksen equalised just after.

Moussa Dembele then gave Spurs the lead before Eriksen scored his second and Harry Kane converted from the spot.

At Stamford Bridge Chelsea need a late but controversial stoppage time goal to draw 3-3 with Everton.

John Terry’s own goal and Kevin Mirrallas gave Everton a 2-0 lead, however quick goals by Diego Costa and Cesc Fabregas put Chelsea back in the game.

In the 91st minute Ramiro Funes Mori’s header looked to have got the winner but John Terry scored in 98th minute to ensure the points were shared. Replays showed that Terry’s goal was offside while seven minutes had been added as extra time only for the match to be played until the 99th minute.