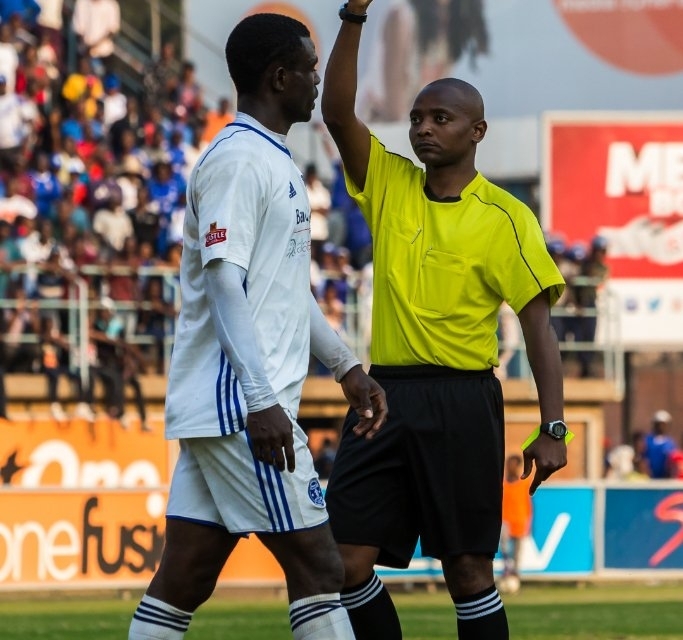 The decision by the Philip Chiyangwa-led Referees Committee to rescind Christian Epoupa’s red card in the Battle Of Zimbabwe has been received with mixed feelings by local football followers.

ZIFA announced yesterday afternoon that the dismissal of the Ntouba has been reversed. The Dynamos player was sent off in the 87th minute after he head butted Highlanders defender Peter Muduhwa from an off the ball incident.

The Sunday incident is a replica of last season’s scenario where CAPS United former striker Leonard Tsipa head butted Muduhwa in a league match at Barbourfields. Tsipa served his ban and the club issued a public apology on behalf of Tsipa.

However, this time there is a complete twist of the things and the decision made has left a lot of football followers stunned

According to Law 12 of the FIFA Laws of Football, Ntouba’s red card was correct as it was a result of a violent conduct.

Part of the Law reads:

A red card can be shown to a player if he endangers the safety of an opponent.

Soccer24 has been following the views of the fans on the story and most of them disagree on the rescindment of Epoupa’s red card.

Wellington Ngadze said: ” I am a Dynamos supporter but if they lift that red card then football has turned to politics. That head butt was serious and you cant lift a red card on such incident.”

Simbarashe Farai expressed his views saying: ” They must punish the referee and leave it there or better still nullify the whole match for poor officiating.”

The referee on the day, Anorld Ncube had a torrid time and some of his judgements left those who watched the game confused .

Francis Mlalazi also commented saying: “Lets put our respective teams aside,on what basis is the red card nullified? Can there be clarity who were involved in this decision making, was that the only incident that had to be considered? What action was then taken towards the referee?”

According to the Chronicle the Referees’ Committee vice president Gladmore Muzambi said he was not aware of the development which brings questions to which members of the committee Chiyangwa consulted.

Meanwhile, other fans said ZIFA should have focused on Dynamos fans that threw missiles and ball on the field. Others weighed in and compared the Sunday’s incident with that of Liverpool’s Sadio Mane. They said Epoupa deliberately head butted Muduhwa and the red card should stand.

However for some they have a different view to the story.

Farai Joe Matikiti defended the decision saying: ” The referee is there to protect the players but at this point he was ignoring all the frustrations against the Cameroonian. Worst, aiita rough Epoupa hapana zvaaiitwa asi akazoona kukanganisa kwa Epoupa .At other point communication naEpoupa inonetsa pama languages, but sa referee you are there to balance the game and take all players as one in your hands also.”

SaNdoro Ba Maka said: ” Those who watch European football, please take note that team managers and other players talk whilst covering their mouth. They do this so that they are not caught on the wrong side when games goes under review to enforce or fine or nullify red cards or any other situations that requires discipline, in this case there was evidence to suggest the player was pushed to the limit without the referee giving a warning or talking to the opponent player.”

The decision has sparked fierce debate like that of the first installment of the Battle of Zimbabwe where Epoupa scored a goal which many think it was from an offside position. The match was soon abandoned three minutes before half time with the scoreline tied at 1-1 and Dynamos were awarded three points.