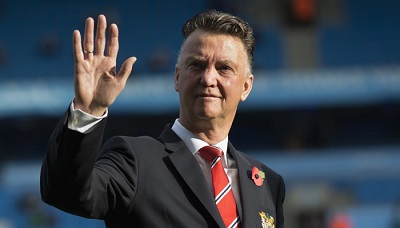 During the Dutchman’s two-year stint as United manager from 2014, the club secured fourth and fifth-placed league finishes along with an FA Cup triumph, but Van Gaal was regularly criticised for his negative tactics.

Mourinho’s United won the League Cup and Europa League in his first season in charge but the Portuguese has been accused of “parking the bus” in big games, and Van Gaal believes the former Chelsea boss deserves more criticism.

“I would rather watch City play than United,” Van Gaal was quoted as saying by the Mirror.

“You need quality in a squad and it’s clear City have a better squad….And yet, right now, looking at United, I have to conclude Mourinho is not being criticised while it’s far more boring football.”

“What United produce now is defensive football. I always played attacking football… They don’t do that now because Jose Mourinho plays so defensive.”

City are on a record 14-game winning streak in the league while United, who finished sixth last season, lost 2-1 to their neighbours on Sunday to slip 11 points adrift of them in second position.

Van Gaal, who was sacked the day after his FA Cup triumph, clarified that he had no personal issues with Mourinho but hit out at United CEO Ed Woodward, saying that the 46-year-old did not openly communicate with him.

“With all my experience, I know the unwritten laws of football. A club has to prepare for the future. I can understand that and they should have approached me. Ed could talk to me but he did not.”