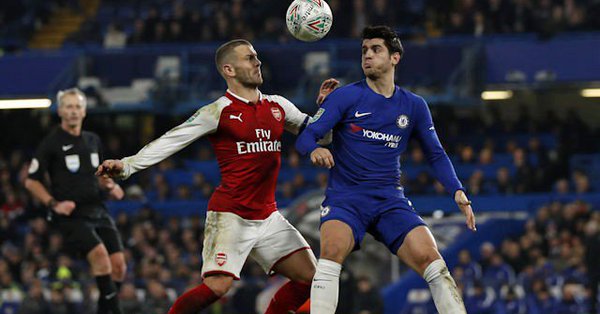 Chelsea and Arsenal played out a goalless draw on Wednesday night in their first leg of their EFL Cup semi-final at Stamford Bridge.

Alexis Sanchez started on the bench and came on as a second-half substitute, putting in a lively display after replacing Alexandre Lacazette. Jack Wilshere suffered an ankle injury and will likely miss at least one game.

Antonio Conte’s men blew two good chances in the second half when Andreas Christensen headed over the bar from point-blank range while Victor Moses had a goal-bound shot blocked by Shkodran Mustafi.

Arsenal striker Lacazette also had a glorious first-half opportunity but wasted it.

Cesc Fabregas was fouled by Danny Welbeck in the 88th minute but play continued after the referee consulted Video Assistant Referee.

The match ended in a stalemate, and the teams will play in the second leg on January 24.