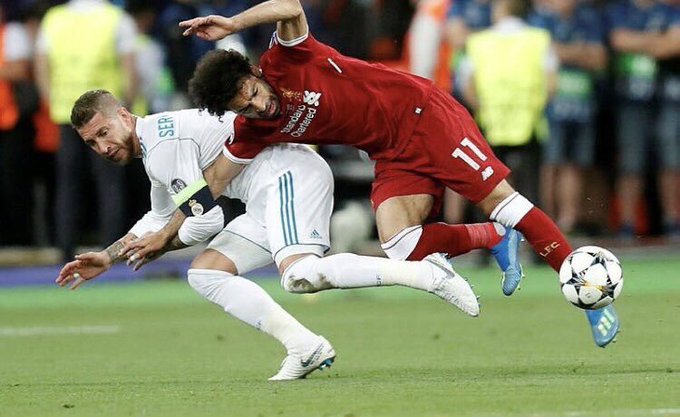 The incident that happened during the UEFA Champions League Final that involved Liverpool forward Mohamed Salah and Real Madrid defender Sergio Ramos has featured as a question in a law exam.

Ramos’ tackle forced Salah to leave the pitch 30 minutes into the game with a shoulder injury.

BBC Sport reports that students at the University of Damascus in Syria were asked about the incident in their General Penal Code exam.

The question read: “Sergio Ramos injured Mohamed Salah in the 2018 European Champions League final. Naturally, Ramos cannot be held to account for this action from a criminal law perspective due to four conditions that make the use of violence justified in sports. State these conditions.”

The question seems to have been met with good humour and sporting rivalry from most students, with the opposition Enab Baladi website saying that some described the teacher who set the exam as a “defeated Barcelona fan” – Barcelona’s fierce rivals Real Madrid won the final in Kiev after their 3-1 victory over Liverpool.

Another Facebook user commented: “Any Barcelona fan would have torn up the exam paper and left when they heard Ramos’s name.”

Others commended the professor who wrote the question for having students apply the law to a real life example, while the university’s own Facebook page rushed to the defence of the teacher. “The question was clear and frank. All thanks and appreciation goes to the academic staff in general,” it said.

It attached to its post a picture of the question, and the textbook answer, also answered correctly by a student posting on Hawa TV’s Facebook page.

“The conditions are: 1 – That the game is held according to the law. 2 – For the injured player to have consented to take part in the game. 3 – For the player who was behind the injury to have respected the rules and principles of the game. 4 – For the injuries to have been sustained during the game,” they wrote.