Injured Anthony Laffor speaks on return ahead of Warriors encounter 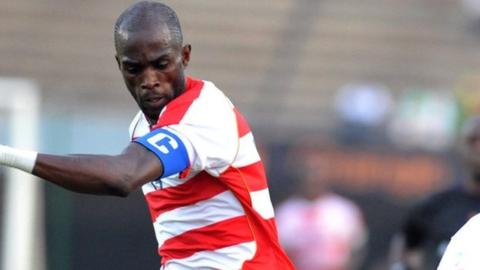 Liberia midfielder Anthony Laffor says he is making strides in recovering from a knee injury suffered in the Afcon qualifier, Group G match against Congo last month, and hopes to play against Zimbabwe.

The 33-year-old Mamelodi Sundowns man is part of the squad announced on Monday that will play the Warriors on the 18th of November.

In an interview with Kick-off.com, Laffor who has just made two appearances this season due to injuries revealed that he is expecting to return to action soon.

“I got injured in training, and I was recovering well. I went to play for my country, and after the game against Congo, I got injured on my knee. But soon you guys will see me on the pitch,” he said.

“We [Liberia] also have a game against Zimbabwe very soon, so I need to prepare very well and see how best I can handle the situation. I am not far [from making a return].”

The encounter will be played at Samuel Kanyon Doe Sports Stadium in Monrovia.

The west Africans need nothing less of a win to keep their chances of reaching the finals alive. On the other hand, the Warriors want at least a draw to book their qualification.