CAPS United consolidated their top spot on the log after beating Mushowani Stars 2-0 in a Match-day 25 encounter played at Trojan Stadium on Sunday.

The Green Machine are now on 47 points, five clear of second-placed Chicken Inn.

Kelvin Ndebele opened the scoring on minute 25, and the hosts could have levelled the terms a few moments later but were denied by the upright.

Mushowani hit the woodwork again in the second half before CAPS United doubled the lead with six minutes left on the clock.

The game ended 2-1 after a late consolation for the home team right on the stroke of fulltime.

At Rufaro Stadium, Dynamos were held to a 1-1 draw by relegation-threatened Bulawayo Chiefs.

They started the game on a slow pace and were frustrated by Amakhosi who drew back in the opening minutes and relied on counter-attacks.

Nothing big came up as the game progressed and both sides failed to create meaningful chances until the break.

The deadlock was only broken a minute into the second half after Dembare captain Edward Sadomba who was returning from an injury tapped in Godknows Murwira’s cross.

The visitors followed up with some efforts from Arthur Musiyiwa and Chikosi but they both failed to bring any trouble to goalkeeper Simba Chinani.

Dynamos forward Ngadu Mangala also had his chance but was denied by the post from an acute angle.

The match ended in a 1-1 stalemate.

Across the city at National Sports Stadium, Herentals scored late to squeeze a point against Highlanders.

The game produced three penalties as the Students played out to a 1-1 draw with the Bulawayo giants who took the lead in the 17th minute.

Prince Dube secured the advantage after converting from the spot.

The home team had wasted a chance to go in front two minutes before after Richard Hachiro’s penalty was saved by Ariel Sibanda at the other end.

Another spot-kick was awarded to Herentals in the 88th minute and this time they scored through substitute Blessing Majarira. 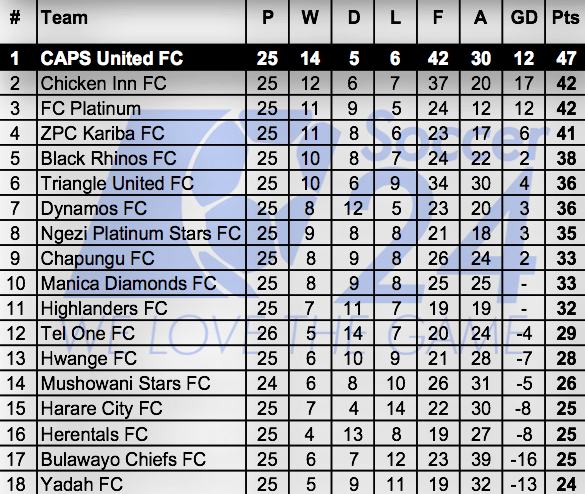