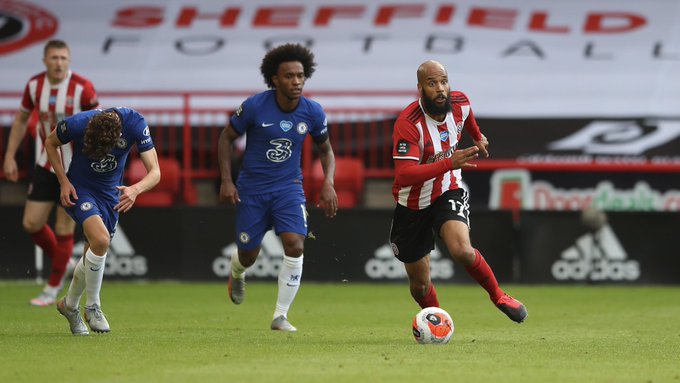 Sheffield United’s push for European football took a turn in the right direction after they comprehensively dispatched Chelsea 3-0 on Saturday.

The Blades saw off Frank Lampard’s men thanks to a brace from David  McGoldrick and the other from Olie McBurnie.

Incredibly, Chelsea had 76% ball possession but still came second best in the clash as Chris Wilder’s men ripped them apart.

The Blades opened the scoring through McGoldrick, who pounced onto a rebound following a save by Kepa in the 18th minute to slot home his first Premier League goal.

Enda Stevens’ delightful cross was headed in by an unmarked McBurnie for Sheffied’s second 15 minutes later and those two goals separated the two sides at the break.

McGoldrick put the final nail on the Chelsea coffin in the 77th minute when he took advantage of a mix up at the back to score his second and Sheffield’s third.

The result sees Sheffield go sixth while Chelsea remain third on the table.