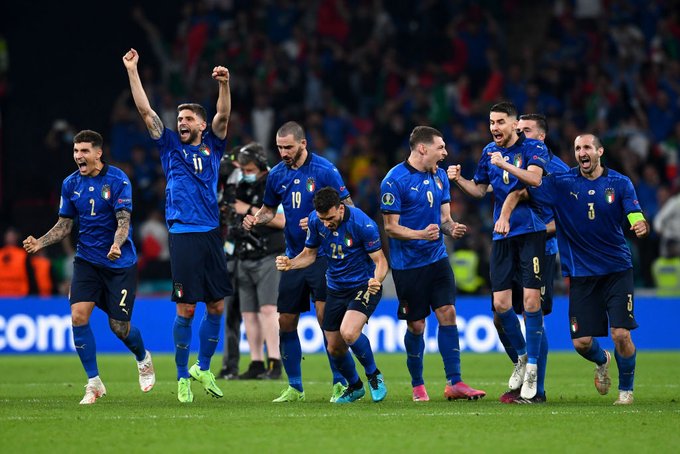 Italy beat England 3-2 on penalties to win the 2020 European Championship for the second time in their history.

The game ended 1-1 after extra time and was to be decided by a shootout.

The Three Lions didn’t take long to set the pace and went into the lead as early as the second minute. Luke Shaw scored the opener with a half volley on the back post after connecting a cross from Kieran Trippier.

Italy tried to make a quick response but were failing to break beyond England’s backline. They couldn’t create a threatening chance until the 35th minute when Federico Chiesa came closest to equalise but dragged his shot an inch wide.

England, on the other end, were forced to play deep and didn’t attempt to reach the goal again for the remainder of the period.

The second half saw the Azzurri continuing pilling the pressure, but this time reached the goal area a couple of times with Lorenzo Insigne and Chiesa both forcing saves from goalkeeper Jordan Pickford.

The extended spell of dominance finally paid off in the 67th minute when Leonardo Bonucci mopped home a rebound after Marco Verratti’s header, from a corner kick, hit the post.

Italy maintained their high line, taking the game to England, but the match remained level until the end of ninety to go into extra time.

Goalmouth incidents became few and far between after the restart with the Azzurri again posing the majority of the threat while England only upped their tempo in the second period of extra time.

Italy went on to win the match 3-2 in the penalty shootout to deny England their first-ever European Championship.