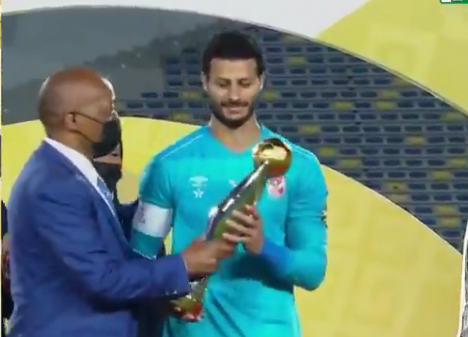 Al Ahly captain Mohamed El-Shenawy had to celebrate his team’s Champions League triumph without his medal on Saturday night.

The skipper was the last person to walk on the podium to get his ribbon and subsequently lift the trophy. However, the allocated medals ran out, leaving him without getting one when he stepped up.

Nonetheless, he still had something to smile about as his side won the trophy for a record tenth time.

Second-half goals from Mohamed Sherif (53′), Mohamed Morsy (54′) and Amr Al-Sulaya (73′) did the damage on Chiefs, who finished the game with a man short after Happy Mashiane’s straight red card.

Amakhosi, on the other hand, were making their first appearance in the final, and were looking to end a six-year drought of major silverware.