Warriors star Marvelous Nakamba has been named in Aston Villa’s starting eleven for this afternoon’s Premier League clash against Liverpool at Anfield.

The 27-year old, who is enjoying fine form since former Liverpool legend Steven Gerrard took over at Villa Park, has now started in all of the games overseen by the former England international.

Below is the Aston Villa team sheet; 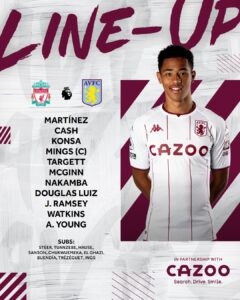