Poor officiating in the PSL: Authorities dither to take action as crisis rears its ugly head 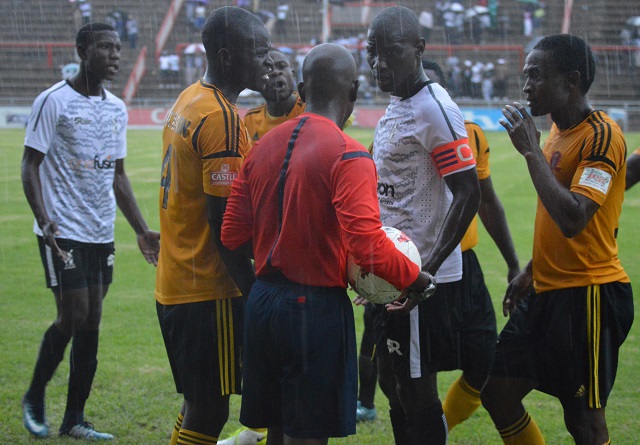 Once again, and definitely not for the last time, a coach has been fined for complaining about poor officiating in the Castle Lager Premier Soccer League.

The duo of Norman Mapeza and Johanisi Nhumwe, coaches of FC Platinum and Manica Diamonds respectively, were fined USD1200 each for criticizing match officials.

Mapeza criticized the referee’s performance after his side’s goalless draw with Dynamos at the National Sports Stadium, while Nhumwe did so when his charges played out a 1-1 stalemate with Herentals at Vengere.

“I think we should have won the match. It would have happened, but because of decisions by the referee (it didn’t happen),” Nhumwe said in his post match interview.

“Those were poor decisions. It is so pathetic. If this is the (kind of) officiating, then that is not football. It seriously needs us to get into the new technological means of officiating in football,” he added.

The development comes less than a month after Bulawayo Chiefs’ Portuguese mentor Nilton Terroso challenged Zimbabweans to tell the truth about how games are being decided in the country’s top flight every week.

Interestingly, most of the complaints against match officials, are of matches involving two teams —Herentals and FC Platinum.

There was a time when Bikita-based referee Todd Matenga hogged the limelight for the wrong reasons after making questionable decisions which left then Triangle United coach Taurai Mangwiro speechless, in the Sugar Boys’ defeat to Herentals at Gibbo.

Matenga reduced Triangle to ten man as early as early as the 9th minute when he gave Collins Muduwa a questionable straight red card for alleged retaliation.

“l don’t have anything to say about this match, they (Herentals) are the best in the league in their own way and we are the worst,” Mangwiro said after the game.

Terroso (Bulawayo Chiefs coach), raised a red flag on the level of officiating in Zimbabwe, after his side’s 0-1 defeat to FC Platinum at Mandava.

In the reverse fixture at Luveve back in February, Norman Mapeza was sent off and the FC Platinum coach did not mince his words in his post-match interview, in which he also accused the referee of allowing Bulawayo Chiefs to field 12 players.

“I don’t like to talk about referees but you all saw what happened, and its not good for our football. In fact, there was a time when Bulawayo Chiefs had  12 players on the pitch, what is going on in our football,” he added.

In another controversy in a match involving the Platinum miners, referee Kuzivakwamwari Jaravaza shocked the football-loving public when he pointed to the spot in the 85th minute, after Highlanders’ Peter Muduhwa was adjudged to have brought down Walter Musona, an incident which led to the abandonment of the contest.

Television replays showed that not only was contact minimum, it also occurred way outside the penalty box.

When asked to comment, recently-appointed ZIFA Referees Committee Vice Chairperson Ruzive Ruzive said he can only do so after March 29, when the committee has its first meeting.

“Can we talk after 29 March. I would prefer to comment after our first Committee Meeting,” said Ruzive.

While the authorities are taking their precious time to address the level of match officiating in the country’s top-flight, the crisis continues to rear it’s ugly head.

Poor officiating in the PSL: Authorities dither to take action as crisis rears its ugly head