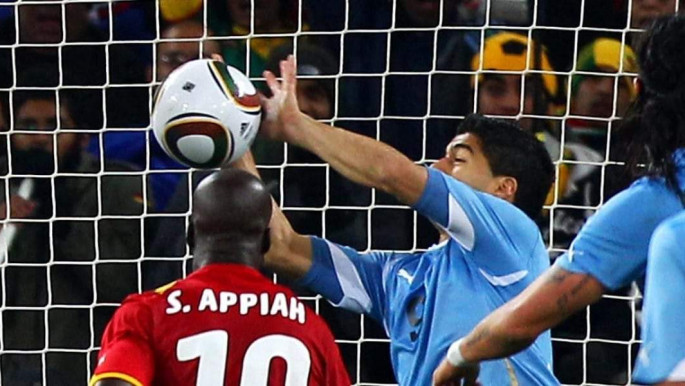 In the eyes Ghanaians, Luis Suarez is a villain.

The Uruguayan striker is one person few in the Western African country will ever forgive.

The Black Stars of Ghana, on African soil, were seconds away from becoming the first ever African country to book a place in the semi-finals of the FIFA World Cup.

It was a match that united Africa as the whole continent rallied behind Milovan Rajevac’s charges.

The Black Stars to shone the  brightest and deserved to proceed to the semi-finals of the global showpiece, hosted in South Africa in 2010.

With the contest reaching the closing stages of extra time, tied at 1-1, with Uruguay pinned in their own half, Stephen Appiah’s goal-bound shot was cleared off the line by Suarez, with his knee.

Dominic Adiyiah then headed the rebound goal wards, and Suarez once again made the block, but this time with his hands.

He was sent off and the Black Stars were awarded a penalty.

Africa waited as Asamoah Gyan stepped up, carrying the weight of the entire continent on his shoulders.

History beckoned, but wasn’t to be. His effort from 12 yards crashed against the crossbar.

Suarez celebrated the miss wildly and the game went to a penalty shootout.

It was a tail with a cruel twist, as Uruguay booked their first World Cup semi-final since 1970, at the expense of Africa, thanks to Suarez.