Mourinho, Ronaldo and Lampard added to Guinness Book of Records 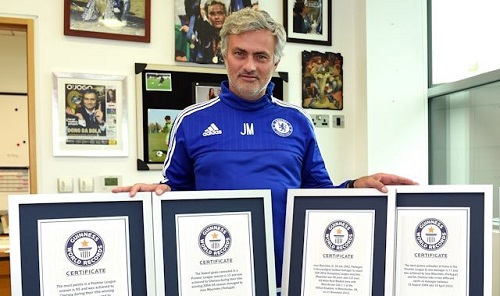 Chelsea head coach Jose Mourinho has been added into the 2016 Guinness Book of records. Five of Mourinho records have been included in the yearly book.

Speaking on the recognition in the Guinness Book of Records Mourinho said, The fact they gave me the awards in a way that I can put them up in my office is nice,’ he said.

‘It’s something fun and as a kid you could never imagine that one day you would be in the Guinness Book of Records.

‘You know me, these awards are for something I did in the past and obviously it’s nice, but for me what’s more important is what I can do in the future.’

Mourinho was not alone though with Real Madrid striker Cristiano Ronaldo and Frank Lampard also being included. Ronaldo ‘s impressive record of 27 Liga hat-tricks while Lampard for scoring against the most Premier League opponents -39