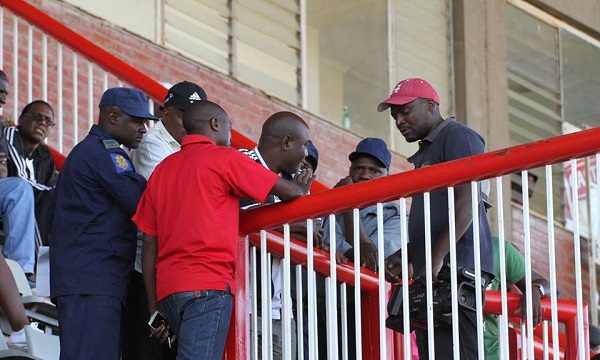 Freelance sports reporter Thandazani Zimbwa (pictured with cap above) was for the umpteenth nearly arrested on Sunday at Barbourfields Stadium after PSL official’s were against the idea of him filming a match between Highlanders and Tsholotsho FC.

Pay per view sports channel Supersport has exclusive broadcasts rights with regards to local topflight league matches while Zimbwa has an individual deal with Bosso that has seen him post his recordings on YouTube.

There was a heated argument at halftime yesterday between Bosso that featured Zimbwa, Bosso chief executive officer Ndumiso Gumede and PSL marketing officer Rodwell Thabe and police were called to the scene.

Highlanders have argued that they need the video footage for technical purposes ,however the clips which include highlights ,news and previews are going public online.

The PSL has warned Highlanders that they will be hauled before the PSL disciplinary committee if the situation persist.