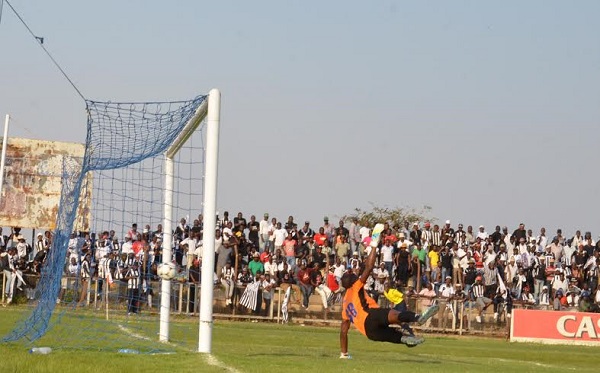 Highlanders moved within a point of log leaders FC Platinum when they edged Chapungu one nil at Ascot Stadium in a Castle Lager premiership match.

With the match seemingly headed for a draw Prince Dube produced a moment of brilliance when he gained possession in the box beat his marker and cooly slotted the ball home beating a badly exposed Roy Mazingi in goals for the hosts.

The goal torched wild celebrations at Ascot which culminated in a pitch invasion and police had to intervene to control the crowd.

Apart from the goal it was a tale of missed chances from the both sides  especially in the first stanza with Highlanders being the more dominant of the two sides.

Highlanders moved a gear up in the second half and could have grabbed a goal in the 69th minute when Ralph Mathema thwarted Charles Mativenga’s move to guide the ball out of play before firing at goal.

Mazingi spilled the ball before Blessed Mbavarira cleared his lines. Two minutes later Gabriel Nyoni blazed his effort over the bar after being set up by Matema.

Chapungu had their moments in the second half and could have surged ahead when Phillip Marufu did well to beat his marker before unleashing a cross but Agrippa Peperere was a shade too late to make the connection.

After the missed chances then came the moment of brilliance by Dube which ensured that Highlanders collect their first set of maximum points at Ascot for the first time in three seasons.

There were skirmishes after the match with Chapungu player Philip Marufu attacking Highlanders players and officials in the changing rooms. Marufu allegedly used a chair in the clash with Highlanders official Mgcini Sibanda left with a bleeding nose after the incident. Highlanders’ Benson Phiri was also struck by Marufu.