Warriors winger Kudakwashe Mahachi has received a backlash after showing disrespect to coach Sunday Chidzambwa in a live video on Social Media.

According to sports reporter Yvonne Mangunda, the recently wedded Mahachi went live on Instagram, blasting the coach for his decision to drop him to the bench and give the starting berth to Talent Chawapiwa in today’s match against Uganda.

The Orlando Pirates winger, who hasn’t shared the replay of the live video, allegedly said that he was better off at his honeymoon than being on the bench at Afcon. 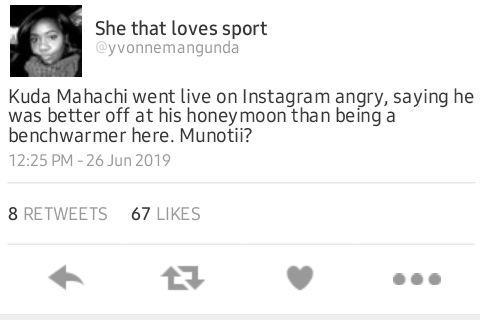 The 25-year old was also on the bench in most games in the qualifying campaign and at some point failed to make it into the final squad.

Meanwhile, Chidzambwa has made four changes to the team that played on Friday with goalkeeper George Chigova replacing injured Edmore Sibanda while Chawapiwa while Chawapiwa comes in for Nyasha Mushekwi.

Thabani Kamusoka got the nod ahead of Marshall Munetsi and Danny Phiri for injured Marvelous Nakamba.

Kick-off is at 7 pm Zimbabwean time.